The following introduction to Hildegard music was reviewed and researched by Dr. Barbara Stuehlmeyer, a foremost expert on Hildegard’s music.  For additional general information on Hildegard of Bingen music, see our post of the same name.

Hildegard von Bingen remains unique in the history of music. Even if she had composed her liturgical chants in a network of composers, most of them would have remained anonymous. We might never have heard of Hildegard music. There is no comparably large work of any composer – either male or female – in the twelfth century or before.

“With music, God has left people with the memory of paradise lost”- Hildegard von Bingen”.

Hildegard created over 77 unique songs. She considered music the point where heaven and earth meet.  She believed harmony to be more than the combination of voices and instruments, for her it represented the balance of body and soul, the interconnectivity of man with the universe. According to Hildegard, it is through music that we experience the paradise that once reigned as reality on earth. And by singing the liturgical chants we can gain access to the angelic choruses. 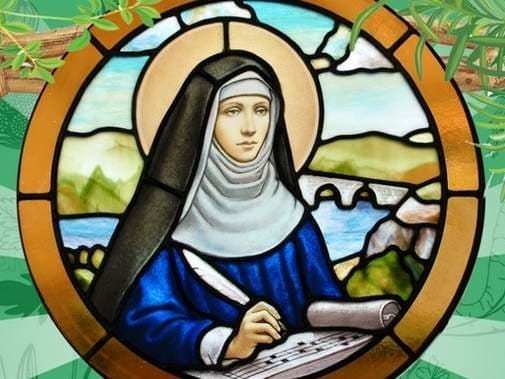 Hildegard was a benedictine nun and was therefore intensely trained in music, due to the daily performances in church. Even if the main influence was the sacred music of the liturgy of hours and the chants of the Eucharist, she also experienced the music of the troubadour and the minstrels of her time.

In addition to these practical experiences, Hildegard was driven by her divine revelations of symphonic harmony. Perhaps as a result of the mixture of practical and spiritual experience that led to the creations of her compositions, her songs beg to be played, heard, and studied. Like all of her creative work, Hildegard considered her music to be the expression of an “Instrument of God”.

Her reputation as a composer eventually reached Nôtre-Dame, in Paris, which was then the center of European music, and where Master Leoninus had established the first school polyphony. Polyphony is the theory of combining several parts, each forming an individual melody and harmonizing with each other.

Gregorian chant as her true inspiration

Although Hildegard never adopted polyphony,  she is credited with contributing to its development in the same way she is with the Gregorian chant. This is reflected in how her music is highly shaped through overtones, which, together with the melodies, developed in the acoustic situation of the Romanic churches. Hildegard, however, relied on the tools of Gregorian chant and the sounds of troubadours of her time as the basis of her sound. 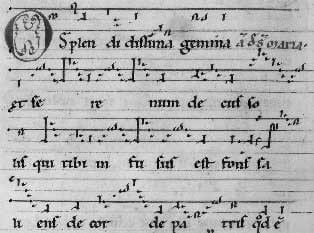 What makes Hildegard’s music so significant is the source of her inspiration. Since childhood, Hildegard had experienced clairvoyance and clairaudience. She received her visions through all of her senses, hearing, seeing, and feeling the light, which she described in several of her works including Scivias.

The sounds Hildegard experienced in her visions came through the “inner ear”, as she described it. Her musical compositions served the same purpose as the descriptive narrative and thumbnails found in Scivias illustrations, illuminations of her transformational visions. Hildegard also expressed the visions she had experienced through her music.

She based her means of expression on the tenants of Gregorian chant, which she personalized with a broader tonal range. Not unusual for the twelfth century, but yet in a very personal style. Hildegard experimented with highly expressive melodic material, expanding on existing forms to create new structures that would elevate her style to new heights.

Along with sleep and wake, Hildegard viewed music as the key to opening a third state of consciousness, a trance-like state. Her firm mooring in faith, combined with openness to the metaphysical, enabled Hildegard and her contemporaries to use music as an auto-suggestive relaxation technique. This meditation was based on the belief that music provides the human organism with positive influence in the healing processes.

A nun’s strict schedule depended on the sequence of chants and prayers. Like the modern practice of mindfulness or Buddhist meditation, music and prayer helped to regulate natural biorhythms. Today, we recognize the phenomenon of the brain’s alpha state, achieved in deep sleep or relaxation. Awakening these alpha brainwaves induce greater creativity and learning.

Oliver Sacks, the great neuroscientist and admirer of Hildegard, observed that humans naturally keep time to music, using hypnotic sounds to enter trance-like states of meditation. Further, music has been found to contribute to synchronicity between the two brain hemispheres, resulting in more effective whole-brain thinking.

Today, Hildegard’s belief in the power of music to heal and calm the body continues to gather support from scientific research. The modern belief rests on the notion that our brainwaves achieve alpha state through the rhythm and flow of quiet music. Hildegard music has an ethereal, flowing quality that definitely qualifies it as calming.

Musical instruments were often heard in Hildegard’s monastery. As a Benedictine nun, Hildegard designed a monastic life based on the inner freedom she had discovered through her encounters with the “living light”. She demonstrates her interpretation of the Benedictine rule through her unique traditions, such as the practice of wearing jewelry and silken garments during the celebration of the Eucharist. The performance of her liturgical play, “Ordo virtutum” is showing both the reliance upon tradition – since there is much documentary evidence for this practice, and the independence of finding her own topics and performing them in a remarkably creative and convent-related way.

Hildegard of Bingen music was part of the musical network of her time. She used the combined modes and a wider range – or ambitus, than the compositions of the Gregorian chant. But she also showed a highly personalized style that can be recognized even by ears not trained to recognize twelfth century music. She also incorporated light via use of the highest vibrations.

Her belief in using music as a tool for relaxation, healing, and unleashing creative power is something we can all incorporate into our lives.