Hildegard of Bingen wrote Ordo Virtutum (“The Play of Virtues”) while asserting her independence, during the construction and relocation of her Abbey at Rupertsberg. Considered the first morality play, Ordo Virtutum premiered in 1152, as a part of the dedication ceremony of the new Abbey.

In many ways, the play represents Hildegard’s midlife transition, and her break from many Benedictine formalities.

Some of the basic themes captured in Ordo Virtutum were later expanded in Hildegard’s second principal theological piece, Liber vitae meritorum (“The Book of the Rewards of Life”, c 1158-1163).

Through the artistic creations of her music and visions, Hildegard of Bingen assembled an unparalleled body of original theological works. Ordo Virtutum represents a combination of artistic mediums, resulting in a groundbreaking morality play that posterity preserves as the precursor to modern opera.

Hildegard’s of love music and theatrical production was reflected in the costumes and design that she incorporated into the play.

The basic theme of Ordo Virtutum

Ordo Virtutum, in essence, portrays the eternal struggle between good and evil. This conflict persists universally in our hearts and increases with the expansion of personal freedoms. Hildegard expresses this conflict in 35 dramatic dialogues between virtue and vice, that battle over the soul of man. 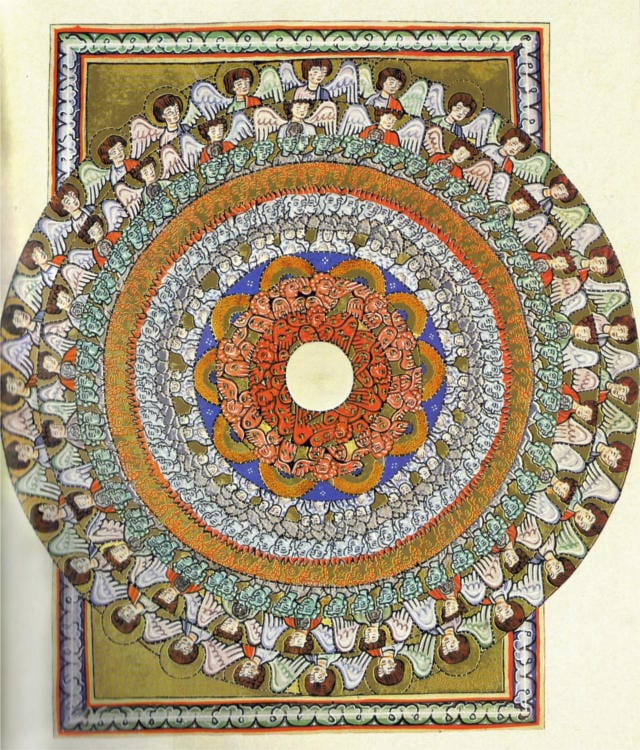 The struggles we experience, between virtues and vice, renew throughout our lives. Hildegard proposes that our nature prepares us to face these challenges because we possess an intuitive sense of good and evil. Hildegard calls this subconscious knowledge of vice and virtue “bona et mala scientia“.

Background of the play

The title, Ordo Virtutum, presents some variation in modern translation. The Latin word “virtus” generally translates into English as “virtue”; however, the related term “vis”, implies power and strength. Similarly, the Latin word “ordo” generally translates to “play” or “dance”, but it can also mean the rules of order. Thus the dual meaning of Ordo Virtutum can be interpreted as the “rules by which the world works”.

For Hildegard, virtues represent both divine powers and human attitudes. The theme of combining divine power with human effort appears throughout Hildegard’s work. Ordo Virtutum presents the forces of virtue as human allegories, singing the visions of divine order.

Ordo Virtutum plays on one of Hildegard’s fundamental concepts: divine forces conspire to support the human soul, eventually leading to fulfillment through spiritual cooperation. The soul can also conspire with evil and negative forces, though eventually we recognize the harm it brings us and return to divine forces to rescue us.

These thoughts remain relevant today against the backdrop of modern values in business, politics, and society at-large. Hildegard regarded positive actions in life as more than simply responding to ethical demands, but as means to bind the human experience with the divine. Accordingly, she considered values such as reverence, love, truth, balance, joy, and hope as the means to health and healing in life.

For Hildegard, health results from respecting the inseparable combination of moral actions and physical well-being. Ordo Virtutum shows how, with guidance and planning, the ethical path lead to balance, health, and wholeness in life order.

Ordo Virtutum tells the story of the challenges of the Human Soul (Anime) as she is guided by the Virtues, led by their queen, Humility, to obtain wholeness of the spirit.  Through Ordo Virtutum Hildegard promotes restoring the lost unity between Creator and Creation.

In February 2017, Tim Slover will present his play, Virtue, in Salt Lake City at the Plan-B Theater.  Virtue interprets Hildegard’s lifetime during the time period when she wrote Ordo Virtutum, which also coincides with her midlife awakening.

Finally, and most recently, we experienced a wonderful contemporary Ordo Virtutum performed by Deepak Ram and Diana Rowan along with the San Francisco Renaissance Voices on Hildegard’s Feast Day, September 17, 2017.

See more on the San Francisco Ordo Virtutum, and the following piece by the Ensemble Vocatrix performing Ordo Virtutum in Los Angeles in 2016, see clip below.