Hildegard of Bingen was Transformational

In the course of our research on 20 Remarkable Things about Hildegard von Bingen, where we attempt to distill all of Hildegard’s contributions into a single list and get at the root of why Hildegard is important, we discovered transformation at the crux of who Hildegard of Bingen was.  Hildegard’s ability to transform herself  made her a dynamic figure worthy of praise centuries after her life.

Hildegard of Bingen was a Renaissance woman, born some 300 years before the actual Renaissance. Any attempt to describe her in some familiar, confining way, clearly falls short. Instead, we describe Hildegard through her many contributions to humanity.

Hildegard of Bingen was…

Hildegard of Bingen was a visionary, theologian, writer, feminist, composer, artist, healer, reformer, medical practitioner, prophet, benedictine abbess, poet, and doctor of the church. Her body of work demonstrates a transcendent depth and breadth. Accordingly, she continues to inspire, challenge, and heal nearly 900 years after her life.

We carry forward this inspiration at Healthy Hildegard; a divine light that transcends theology, unites the human condition, and grounds us in the creative power she championed as the divine spirituality in all of us.

Hildegard of Bingen spent her entire adult life as a benedictine nun of the Order of St. Benedict, never traveling beyond the Rhineland region of Germany (including Rupertsberg, Disibodenberg, and Eibingen). Yet her theological contributions continue to echo throughout the Catholic Church for close to a thousand years, culminating in her being canonized (official declaration of Sainthood) and named a Doctor of the Church by Pope Benedict XVI in 2012.

Within the Catholic Church, one of the oldest institutions in the western world, only 36 people have been declared Doctors of the Church, placing her among the likes of St. Thomas Aquinas and other great minds of Western Civilization. 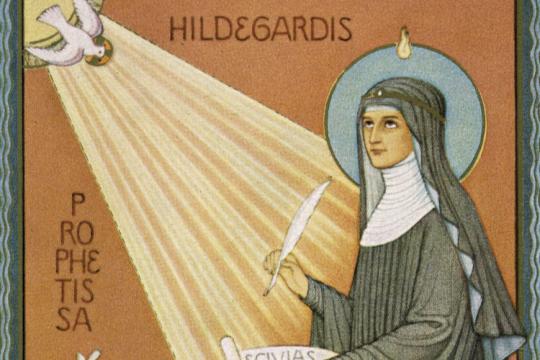 Though she worked entirely within the confines of the Church, during the middle ages, her contributions extend far beyond. Hildegard instructed and inspired concepts within holistic healing, developed new forms of music (symphonia) and opera (Ordo Virtutum, ), inspiring modern philosophy and psychology, contributing to diet and nutrition, and shaping modern theology. She also inspired the spiritual principle known as divine feminine, the dynamic creative force of the cosmos.

A Life in Service, Suffering, and Salvation

Hildegard lived to be 81 years old, which on its own represents a major accomplishment for her era. But it’s not the quantity of her years on earth that matter as much as the quality of her time.

Hildegard lived fearlessly, pioneering many of the forward-looking themes that 21st Century avant-garde thinkers embrace today. At a time when women were not expected to make any notable contributions beyond their homes, Hildegard left a lasting mark that is perhaps more relevant today than it was during her lifetime.

Hildegard of Bingen was born in 1098 as the tenth child to a landed and noble family in Germany’s Rhine Valley. Following custom at that time for noble families, Hildegard’s birth represented a one-tenth tithe of the family’s assets owed to the church.

At the age of eight, she was tithed with the expectation of serving her life in solitude, as an anchorite nun under the oversight of Jutta von Sponheim. In the spirit of her tithing, Hildegard of Bingen was effectively married to the church, and her dowry became church property.

Hildegard lived most of the first half of her life quietly serving-out her role as a nun, though her intellect and inquisitive, challenging nature were recognized early, eventually resulting in leading her own monastery.

She often suffered in poor health, facing debilitating bouts that would leave her weakened and frail. Experiences that would inspire her passion for physical wellness and the bonds between the divine, the body, and the earth.

Despite overwhelming risk, Hildegard followed her calling to reveal the contents of her visions in Scivias.  This was the start of her midlife transition, which manifested in the relocation of her abbey to Rupertsberg, and the writing of Ordo Virtutum (Order of the Virtues) .

According to experts in mysticism, the description of visions experienced by Hildegard of Bingen was consistent with a kundalini awakening process. Hildegard experienced physically painful visions that left vivid impressions upon her that she described as the oneness and interconnectedness of love among all things in the universe. This experience illustrates a holistic approach to Hildegard’s thinking and philosophy. 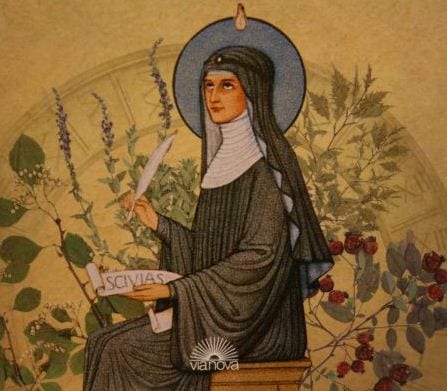 The same deep interconnection was what she reflected within her music, medicine, ecology, cosmology, and theological works. She saw the individual human condition on earth as a microcosm for the universe, the health of the natural world as the health of the human soul, bound by the divine energy that unifies all life.

At the age of 42 (twilight for all of her contemporaries) Hildegard embarked on the most creative period in her life, lasting until her death at 81. Her creative power spanned a number of subjects, often inspired through her visions. She developed prolific new music for the medieval period, including the first opera and play. She wrote extensively on nature, science, and theology.

Among Hildegard of Bingen writings, two of her works, Physica and Causae et Curae, were the only two medical books known to have been written in western civilization during the twelfth century. She also wrote extensively on modern topics like cosmology, and philosophy, with many of her concepts influencing modern thought, including Carl Jung’s visionary work on the subconscious in modern depth psychology.

Much of her experience and visions during her lifetime culminated in her final (of three) visionary works, Liber Divinorum Operum, the “Book of Divine Works.” Many academics consider this her greatest visionary work.

Hildegard of Bingen was and remains inspiring.  She reminds us that at 42 we’re not even close to over-the-hill. We can break from the conventional path and embark on our midlife awakening, embracing our emotional, spiritual, and intellectual individuality.

As long as we’re living, we possess a creative force that lies in the greening power of viriditas. Armed with our own viriditas, we can embark on the phenomenon that Hildegard described as being “carried ever so lightly like a feather on the breath” of some greater life force.

That’s the reward awaiting those who embrace the risk of exploring their inner selves and inviting the connectivity that flows through all of life. The struggles of life, the suffering of our human conditions, ease by overcoming this risk and living creatively and consistently with our true calling.