The evergreen perennial plant, Lungwort (pulmonaria officinalis) derives from the genus of flowering plants in the  Boraginaceae family known as the borage, or forget-me-not family. The plant takes its name from the Latin root Pulmoa, meaning lung. Records of a lungwort remedy first appear from Leonhart Fuchs (1501 – 1566), a German physician and one of the three founding fathers of botany.

The name lungwort traces to origins explained by the ancient doctrine of signatures, which posits that a plant’s appearance reflects its use as a healing herb. The white spots of lungwort correspond with the spots one might find on a sick lung.

In Hildegard of Bingen’s time, a lungwort remedy treated minor lung conditions, such as pulmonary emphysema, bronchial coughs, and asthma. 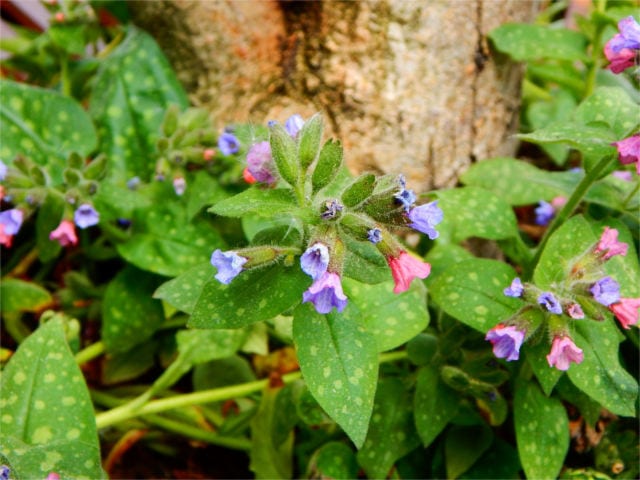 When faced with persistent seasonal exposure to cold and flu viruses, bronchitis and its accompanying mucus results in inflammation of the lungs. In this context, Hildegard medicine recommended a warm cup of lungwort tea, made with a tablespoon of dried lungwort herb, combined with 8 ounces (250 ml) of boiling water, and allowed to steep for 10 minutes. This warm drink should be consumed three times per day.

Hildegard’s “lungwort wine” remedy, derived from Hildegard medicine, addresses minor symptoms related to pulmonary edema. When distinguishing between pulmonary emphysema and pulmonary edema, the rule of thumb holds that the latter often manifests with coughing and shortness of breath arising during the day as well as during the night.

To prepare lungwort wine, combine 3 tablespoons of lungwort with one liter of table wine and boil for 3 minutes. Pass the combination through a sieve and drink 1 cup, 3 times per day, preferably before meals.