Hildegard of Bingen appreciated several yarrow plant uses, based on the flowering plant native to temperate regions of Europe, North America, and Asia. In New Mexico and southern Colorado, it is called plumajillo (Spanish for ‘little feather’) due to its feathery leaf formations.

The great German naturopath, Sebastian Kneipp praised yarrow plant uses for women, saying “women who resort to yarrow are spared of much mischief”. During Kneipp’s time, Germans had many names for yarrow, including variations of: “Tummy Ache Herb”, the “Wound Herb”, “Heaven’s Back Herb”, “Thankful Wife’s Herb”, “Mother’s Herb”, “Hemostatic Herb”, and the “Healing Herb of the World”. Perhaps the most beautiful reference to yarrow comes from an old German name, describing it as “Salvation of all damage”.

In modern German, the word for yarrow is “scharfgarbe”, which derives from a variation on the phrase “sheep healthy-maker”, due to shepherds recognizing the healing properties of the yarrow plant on sheep. After eating yarrow cabbage, wounds on their sheep were healing faster. So when shepherds starting eating yarrow themselves, and noticed it helped with digestive disorders, bleeding, and prevented occurrence of the common cold, the name took hold.

The medicinal origin of yarrow plant uses can be traced back to the ancient Greeks who used it for treating wounds. Achilles, the mythological Greek hero from the Trojan War, is believed to have carried it to treat himself and his soldiers, which is why yarrow is called “Achillea.” “Millefolium,” meaning “coming of a thousand leaves” is reference to the abundance of its small, delicate leaves. Yarrow is known by several other names including: bloodwort, carpenter’s weed, knight’s milfoil, noble yarrow, old man’s pepper, nosebleed, and staunchgrass. 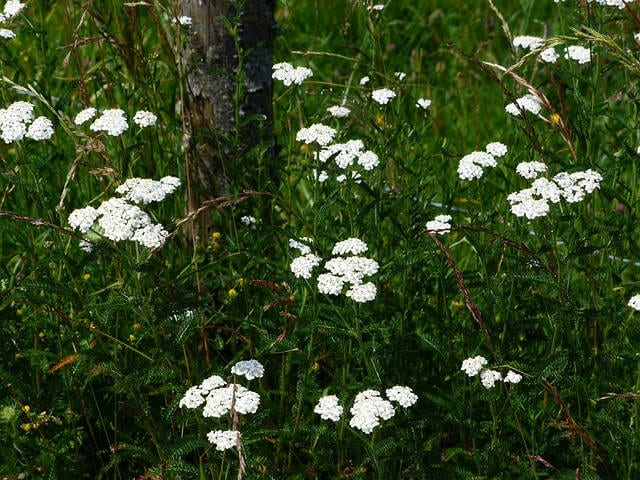 Like the ancient Greeks, Hildegard of Bingen’s yarrow plant uses focused on external wounds and accelerating the healing process. For other treatments, the flowers and leaves of yarrow were eaten or made into a tea to treat gastrointestinal problems, soothe fevers, improve circulation, and reduce menstrual bleeding. The fresh leaves were also chewed on to relieve tooth and gum pain.

Healing Properties of the Plant

Both the leaves and flowers of the yarrow plant have medicinal uses. As with all other herbs, traditionally it’s best to harvest the plant during a waxing moon phase, while in bloom (late spring through early autumn), and to use the herb while still fresh. If drying the plant, store in a cool, dry place.

The Benefits of Terpenes

Yarrow has numerous medicinal properties due to its high concentrations of terpenes. These large organic compounds found in plants – particularly conifer (think “pine”) trees, are why the plants are typically aromatic, resinous, and full of volatile (essential) oils.

These compounds evolved as defense mechanisms to deter herbivores and attractant predatory insects that feed on herbivores but they are also what provide the natural chemical compounds that can heal, protect, and stimulate the human body, along with the bitter tastes and often pleasant aromas. These compounds are often extracted for essential oils used for aromatherapy and topical skin treatments.

Due to the presence of these strong organic chemicals, yarrow has also been used as a preservative and a flavoring additive. Before hops were cultivated, yarrow was used in beer for its similar bittering and preserving qualities.

Long before modern research identified these active organic compounds, Hildegard recognized many of these same properties. The bitter, astringent, anti-inflammatory, anti-microbial, decongesting, and vasodilatation properties of yarrow are why Hildegard held it in such high regard. 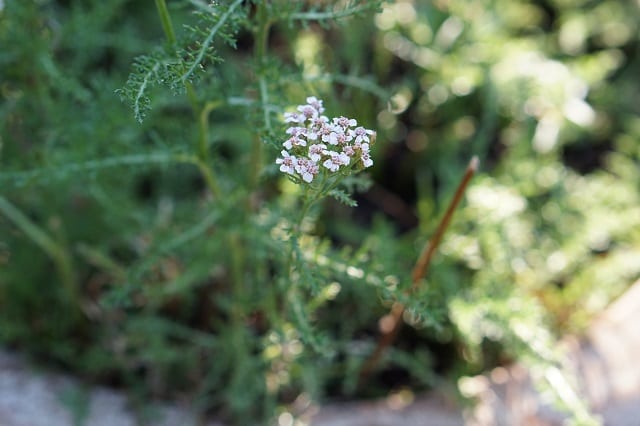 Within her humoral-based classification, she believed yarrow possessed a warm and dry subtlety. Through her practice, Hildegard considered yarrow to be the best protection against infections from cuts and sores. She thought of it as a reliable topical treatment, serving as an antibiotic, well before modern germ theory took hold.