Willow bark serves as an herbal pain reliever, known and appreciated for thousands of years. Use of willow bark appears in traditional German medicine and naturopathy as a painkiller to address discomfort associated with rheumatism, knee and hip arthrosis, and back pain.  In addition, willow bark acts as a headache natural remedy and moderates the severity of fevers.

Willow Bark: One of the Oldest Remedies

The use of this natural remedy to address mild and moderate pain, in addition to fever had been known in ancient times. Ancient Greek doctors described the efficacy of willow bark extracts for rheumatic complaints. For example, Hippocrates used the medicinal plant for pain and fever.

Records show other pioneers in medicine, such as Dioscorides, Pliny and Celsius used willow bark. Willow bark was also known as a popular medicinal plant among indigenous peoples of North America, South Africa, and Asia. 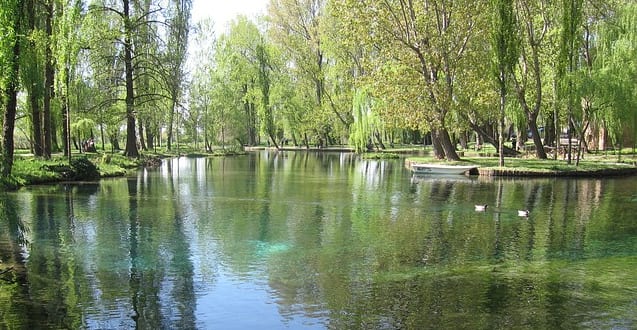 Willow trees in and near water, along a lake.

As a secondary application, and also consistent with the doctrine of signatures, willow bark was thought to address common health conditions related to wet feet, such as cold symptoms.  Admittedly a stretch, the justification for this relationship came since the willow tree often grows in water, leaving the plant with “wet feet”.

The willow, a tree with healing power

Approximately 450 willow species exist worldwide. These species include dwarf shrubs, as little as three centimeters in size, along with other giant trees, growing up to 30 meters high. Each variety of willow tree integrates perfectly into its respective habitat.

In Europe, three willow species have elevated as unique medicinal plants: the Daphne willow (Salix daphnoides), the White willow (Salix alba) and the Purple willow (Salix purpurea). While the use of leaves and flowers appears infrequently, the dried bark found on twigs and branches of 2 to 3 year-old trees forms the central use in herbal teas and extracts. 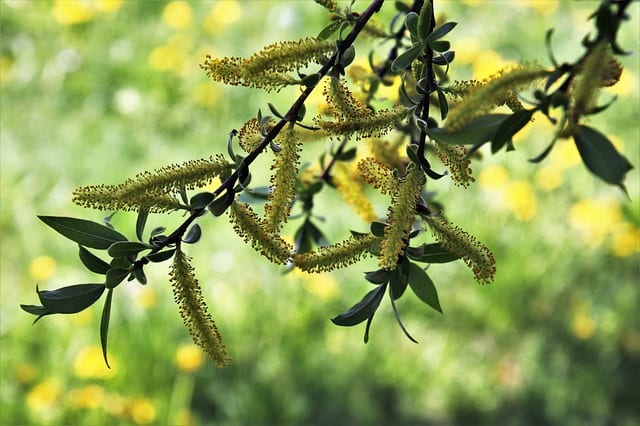 At the beginning of the 19th century (1831) the Austrian pharmacologist and professor, Johann Andreas Buchner isolated a yellowish mass found in willow bark, which he called salicin. In subsequent years, salicin rose to prominence as a medicine, replacing quinine derived from the cinchona tree.

Salicin became known as a remedy for fevers, colds, sinusitis, malaria, and even pneumonia. Later, its use in rheumatic fever became increasingly common. In the last quarter of the 19th century, records show salicin (derived from willow) successfully addressed symptoms of acute rheumatism, arthritis, mild gout, and chronic rheumatoid arthritis.

The Mother of Aspirin

150 years ago, in the 1840s, the German chemist, Hermann Kolbe established an important pharmaceutical milestone.  He artificially produced salicylic acid. This act of separating a single compound from thousands of closely-related plant substances, led to the new science of synthesizing chemicals.

Salicylic acid became one of the first synthetically made drugs, leading to the development of Aspirin.

Aspirin (acetylsalicylic acid), one of the best-known allopathic medicines

By itself, salicylic acid showed negative side-effects, including skin irritation, allergic reactions, and stomach ulcers. Another German chemist, Felix Hoffmann continued working to reduce negative consequences, without eliminating the desired effects. Hoffmann succeeded in adding a chemical side group to the structure of the salicylic acid molecule.

This resulted in acetylsalicylic acid (Aspirin), one of the most widespread painkillers.

Acetylsalicylic acid is one of the most popular pain reliever

The rise and fall of willow bark

At the beginning of this century, the natural substance derived from willow bark, salicin fell under the long shadow of salicylic acid.  Subsequently, willow bark fell further into obscurity by the overwhelming success of acetylsalicylic acid, in the form of Aspirin. Ultimately, over the years, salicin, the godfather of these remedies all but disappeared.

Further compounding the issue, willow bark remedies often fell beneath the rigorous standards of pharmaceutical quality testing, leading to varying degrees of salicin contents, and unreliable results. Not until the 1960s were the healing powers of willow bark rediscovered, and made the subject of more intensive research.

Explaining the effect and transformation of salicin in the body

In order to understand the unique qualities of salicin found in willow bark, it serves to follow its path and transformation in the human organism.

Salicin from willow bark extract – after being transformed into salicylic acid – has similar effects in the organism as synthetic acetylsalicylic acid (ASA or Aspirin). Both substances reduce pain and dampen inflammation.

While willow bark may be the mother of aspirin, it serves as a gentle alternative with few side effects.  The German Medical Association points out that if taken regularly, ASA (Aspirin) may lead to irritation of the mucous membranes, bleeding in the gastrointestinal tract, and stomach ulcers. 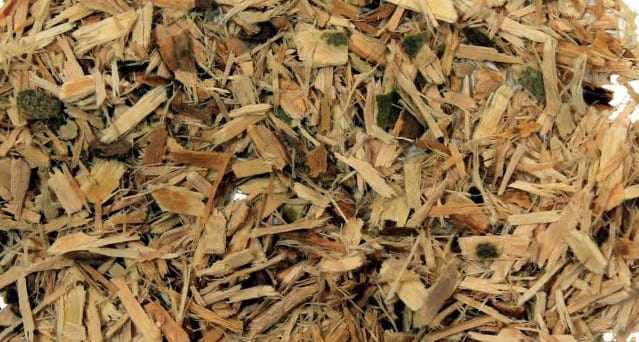 Willow tree bark with fewer side effects in contrast to aspirin

In contrast to ASA (Aspirin), white willow bark has very few side effects. When taken in moderation, willow bark extracts do not affect blood thinning to the same degree as aspirin. Even though willow bark does inhibit platelet aggregation, causing some blood thinning, this occurs at a slower rate than with aspirin.  Therefore, willow bark may be suitable to treat pain before and after surgery.

Aspirin may cause irritation of gastric mucosa to a degree less common with white willow bark. Some people may experience nausea and stomach pressure related to individual sensitivity to the tannic acid in willow bark.

An allergic reaction triggered by small amounts of salicylates may also occur in phytotherapy. Ideally avoid willow bark, if allergic or sensitive to salicylates (such as Aspirin). Hypersensitivity to salicylates can lead to hives, asthma, colds and bronchospasms (cramping of the muscles surrounding the respiratory tract).

Unlike Aspirin, willow bark contains numerous active components working together, rather than a single active substance.  Together each of these agents influence the other, and in their totality make-up the healing potential of this medicinal plant.

In addition to salicin, willow bark contains derivatives of salicin such as salicortin, tremulacin and populin, the composition of which varies depending on the parent plant. Salicin content must be at least 1.5 percent to achieve willow bark’s desired effect. For example, the Purple willow (6 to 8.5 percent) and the Daphne willow (5 to 5.6 percent) have high Salicin contents.

Willow bark contains large numbers of secondary plant substances. These include polyphenols, including flavonoids (isoquercitrin, kaempferol and quercetin), which possess antioxidant and anti-inflammatory effects. The tannins (procyanidins) contribute to willow bark’s bitter taste, and have antimicrobial effects as they remove the nutrient medium from bacteria (e.g. on the mucous membrane).

Willow bark has a rich history over thousands of year of use as an herbal remedy in traditional German herbal medicine. The most important application areas at a glance include the following.

One can take dried or powdered willow bark in many different forms. The average daily dosage of about 5 grams of willow bark corresponds to about 45 milligrams of total salicin. In some cases consider higher dosages. 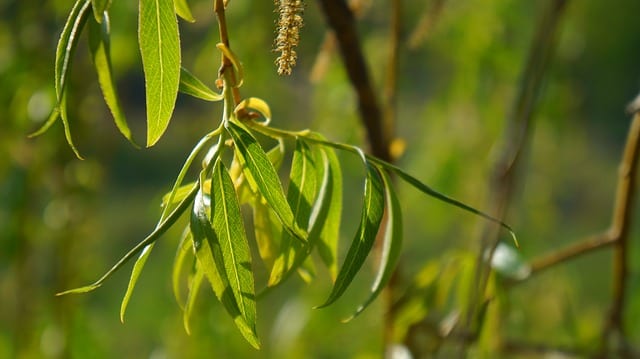 The drug derived from willow bark, salicis cortex received positive review by the German Commission E in 1984. This positive monograph was confirmed and updated in 1997 as the European Monograph of the European Scientific Cooperative on Phytotherapy (ESCOP).

Arthrosis is one of the most common joint diseases worldwide. Joint wear and tear contributes to difficulty in moving the affected joint. Recurring inflammation leads to pain, swelling, redness and often a burning sensation.

In the willow bark group, movement restriction improved and pain reduced by 14 percent. In the placebo group, pain increased by 2 percent. The scientists and the study participants equally concluded that willow bark extract has an analgesic effect in osteoarthritis.

In addition, clinical and pharmacological findings on the efficacy and tolerability of willow bark extract were confirmed in further clinical studies. 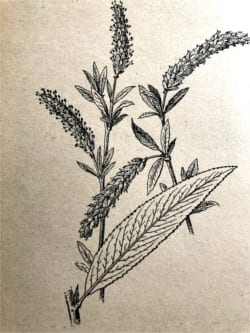 In a further study, the University Hospital Haifa (in the working group of Prof. Eisenberg), conducted a double-blind study on more than 200 pain patients. According to the test, the group treated with willow bark showed significantly better pain reduction than the control group. In the group that had taken 4 tablets (equivalent to 240 mg salicin) per day, every third patient experienced pain-relief at the end of the treatment.  In the group with 2 tablets (equivalent to 120 mg salicin), every fifth patient.

Just like dried and powdered willow bark, willow bark extracts can be taken in the form of drops, tablets, or capsules. Since the active ingredients do not completely pass into the tea during a tea preparation (and, due to the bitter flavor), consider a standardized ready-made preparations.

Willow bark can be used as a cold water extract for fever, inflammation and headaches. Simply pour 2 teaspoons (about 7 grams) of willow bark over 2 cups (300 milliliters) of cold water and leave the mixture to stand overnight (8 to 9 hours). The next morning filter the bark and drink the extract twice a day throughout the day.

Willow bark tea helps in the treatment of feverish colds, headaches, joint discomfort and rheumatic complaints. It is always prepared in the same way.

The dosage is as follows (for use with children, please consult your alternative practitioner or pediatrician):

Add 1 teaspoon (about 3.5 grams) of finely chopped willow bark to 250 milliliters of cold water. Heat the mixture slowly to boiling, and strain through a fine sieve. Another preparation method is to infuse 1 teaspoon of willow bark with a cup of boiling water, let the tea steep for 20 minutes and then remove the bark.

Drink 2 to 3 cups of willow bark tea throughout the day.

Willow bark powder is used specifically for fever and mild rheumatic discomfort. The preparation is the same as for tea infusion, but the dose is determined by the condition.

Consider the patience of slow medicine

Many people use willow bark for a few days to address acute pain, then consider it ineffective, and stop using it altogether. The transformation of salicin takes place slowly in the body, and therefore cannot match the pace of synthetic painkillers.  Like many Hildegard remedies, slow medicine and patience accelerates healing.

It can take up to 14 days for willow bark to achieve its full effect, meaning this may not represent the best remedy for acute pain. Rather, consider willow bark for chronic discomfort. In addition, the effect lasts longer than with conventional painkillers and potentially results in fewer side effects.

If you are hypersensitive to aspirin, suffer from asthma, gastrointestinal ulcers or limited kidney or liver function, only use willow bark after consulting your doctor or alternative practitioner.

Topical Use of Willow Bark for Skin and Hair

In addition, monastic medicine and klosterheilkunde rank willow bark to address mild forms of the following.

Willow bark for skin and hair

Topically, salicin has a keratolytic (wart dissolving or descaling) effect (i.e. it helps to remove the dead cells from warts or lesions). This characteristic of willow bark may serve people with different skin problems.

Salicin also inhibits the production of fat and counteracts inflammation of the skin, positively influencing the mechanisms that cause pimples and acne. This leads to increased sebum production, to help keep the skin moisturized.

American research shows that salicin activates precisely those genes associated with the youthful appearance of the skin, while suppressing those genes that cause the skin to age. The study found that salicin positively influences the structure, moisture, pigmentation and differentiation of the skin.

If a tea is used for the topical treatment, take about 3 grams of willow bark per 100 milliliters of water. In most cases a willow bark tincture (alcoholic liquid extract) works best for topical application.