After perusing our website, we hope you quickly appreciate our enthusiasm for bitter herbs, healthy fasting, and the remedies defined by Hildegard of Bingen medicine. Years of tireless research has resulted in Healthy Hildegard emerging as a leading resource on Saint Hildegard’s life, beliefs, spirituality, and remedies.

In the process of aggregating the collective knowledge of Hildegard’s life and accomplishments, we continue to seek ways of helping others benefit from the body of knowledge left by Hildegard von Bingen. We seek out remedies like Hildegard’s Original Bitters Tablets, which we believe capture the spirit of Hildegard’s philosophy on health and nutrition. And, they’re an easy way to reacquaint ourselves with healthy digestive bitters.

Historically, and among many cultures, bitters serve as a common element in diets. Modern western palates prefer sweeter and more savory flavors. In the process, we exclude healthy bitters, inadvertently abandoning the many health benefits found using bitters. We partnered with a European Herbal manufacturer, Eurbal to bring Hildegard’s Original Bitters Tablets to market.  Finally, a bitters tablet inspired by Hildegard, made using eight natural herbs.

What herbs were used? And, Why?

Known as the king of bitter herbs, gentian root represents a natural bitter substance found in the mountains of southern and central Europe. Commonly known as bitter root, bitterwort, and stemless gentian, this naturally growing plant has been used as a bitters to stimulate improved digestion and to treat basic gastrointestinal issues.

Angelica is another natural bitter that is widely cultivated in northern Europe. Once found only in small populations, it became a focus of cultivation in the 16th century. Much like gentian, angelica is known for its  medicinal qualities in addressing minor gastrointestinal distress, acid reflux, and circulation issues. Angelica root serves as an excellent addition to Hildegard’s Original natural bitters tablets.

Artichoke may not have originated in Germany like Hildegard of Bingen, but at some point, their paths crossed. Artichoke, a plant that originated in the Mediterranian, is loaded with nutrients — making it an excellent addition to our natural bitters tablets. But how does artichoke leaf benefit you? 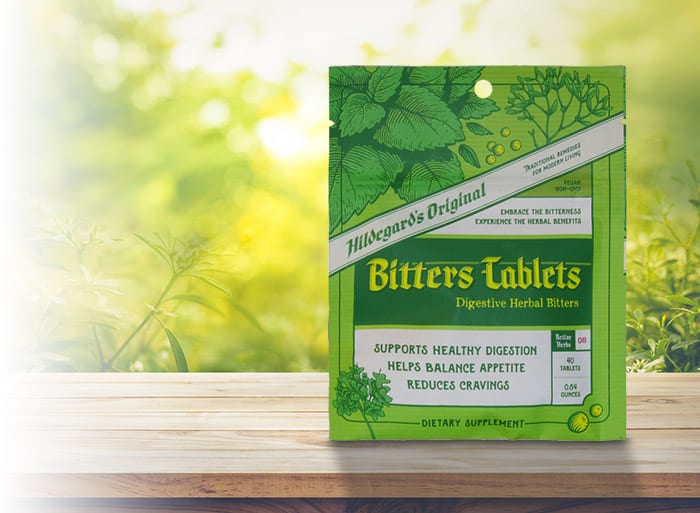 Galangal is a plant from southeast Asia that bears close similarity to ginger. Galangal root contributes to Hildegard’s Original bitter tablets through various health benefits. Galangal is widely known to have anti-bacterial and anti-oxidant qualities that when introduced to your body can fortify it from both sickness and free radicals. When used in conjunction with other natural herbs, galangal bitters represent an excellent dietary supplement.

Cinnamon is another southeast Asian spice that boasts incredible health benefits. While cinnamon is not commonly thought of as an herb, but rather as a spice, it is an excellent herbal bitter in terms of both flavor profile and health benefits. Cinnamon bark, when prepared properly, can be used as a supplement to remedy gastrointestinal issues, stomach cramps, and other stomach and GI-related issues.

Originating from the Indian subcontinent, cardamom is an incredible natural dietary resource. While cardamom is a bitter herb, some claim that it has a faintly sweet taste. When ingested, cardamom can contribute to a number of different health benefits ranging from gastrointestinal and digestive health to detoxification from antioxidants and reduced inflammation caused by chronic disease and injury.

Milk thistle is a thistle plant native to the Mediterranean region but has since spread to most temperate regions in the world. Milk thistle seed serves as a valuable bitter herb in Hildegard’s Original bitters tablets due to the many natural health benefits it contributes. Much like the other herbs contained in Hildegard’s Original bitters tablets, milk thistle seed helps boost the immune system, promote digestive health, and produce liver-enhancing hormones.

In the centuries since Hildegard of Bingen’s herbal discoveries, bitters have slipped from modern diets due to an increasing lack of preference for bitter flavors. While the shift to diets appealing to sweeter and more savory palates might reward our taste buds, we have lost many of dietary health benefits needed by our bodies. Hildegard’s Original Bitters tablets captures eight valuable bitter herbs that can be taken quickly and effortlessly before each meal.

So what are you waiting for? Check out Hildegard’s Original Bitters Tablets today!