Our ongoing effort to cultivate the community of Healthy Hildegard continues to surprise us with how many people have been touched by the spirit of Hildegard of Bingen. We have been blessed with many opportunities to meet people from all walks of life, who graciously share with us their deeply personal journeys.

Through each of their unique stories, their struggles, and triumphs, we learn more about the power of Hildegard’s life. But we also learn about how we are all connected in ways that might otherwise have gone unnoticed. Hildegard’s legacy has a way of uniting kindred souls, through great effort and serendipity alike.

Our own discovery of creative power relatively late in life is a touchstone for connecting with others who have had similar experiences. We welcome these stories we call our midlife transitions. We originally discovered this theme in the biography of Hildegard of Bingen. Our initial goal was to collect these stories of people who, like Hildegard, experienced a midlife awakening. And to share those stories with our readers. In this effort, however, we have discovered so much more than just stories.

Occasionally, we encounter a story in which the catalyst is less about creativity in general and more about Hildegard. Shanon Steringer’s story is one of those.

At the age of 42, Shanon found herself in Eibingen, Germany. Eibingen is home to the abbey inspired by Hildegard. Like Hildegard, whose awakening took place at the end of her 42nd year, Shanon had embarked on a new path toward the unknown. 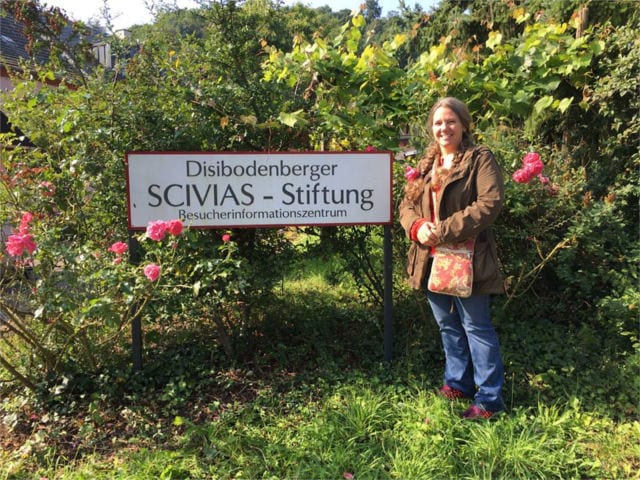 Shannon had reached a point in her work for the Catholic Church that called her future with the Church into question. Up until then, most of her work had been focused on women’s leadership in the Church. But the male-focused doctrine of the Church was at odds with her desire to further her work.

Shanon is a parish pastoral minister at St. Anthony’s Church in Fairport Harbor, Ohio. She has been on the staff for almost 20 years. She first felt her calling to ministry in the late 1990s when she embarked on her formal studies. Over the years, and before her midlife awakening, she earned a BA in Religious Studies (majoring in classic and medieval Christianity.) Separately, she would also earn an MA in Theology and an MA in Ministry from Ursuline College.

Later, after beginning her D.Min program at the seminary, Shanon experienced what she calls a “dark night of the soul”. As a female minister in the Roman Catholic Church she felt she had reached her limit. As a result of her dark night, she sought to reevaluate her life’s work. Shanon withdrew from her D.Min program, as well as the certification program for lay ecclesial ministry. She set out to discern her own path.

Dark Night of the Soul

For six months she was no longer an official student, though she continued to study within the Anglican Church. Shannon chose this church because she saw greater opportunity for women. She eventually overcame the dark night. She was able to affirm that that she had been called to continue her D.Min work. Now, with a focus on women and leadership in the Roman Catholic Church.

Though Shanon remained unsure of her own capacity to endure the challenges that lay ahead, after much prayer she returned to the D.Min program. She also continued with the lay ecclesial ministry certification program. She completed both in December 2011. Shanon wrote her dissertation on the topic of “Celebrating the gift of women in the life and mission of the Church.”

It was during her D.Min dissertation that Shanon met and fell in love with St. Hildegard of Bingen. Shanon celebrated her graduation from both seminary programs in 2012. This was the same year Pope Benedict XVI canonized Hildegard and named her a Doctor of the Church. Immediately, she felt called to learn more about Hildegard. Within the year Shannon was enrolled as a Ph.D. student in the field of Ethical and Creative Leadership.

In her PhD program, Shanon chose to do her research on Hildegard as an example of a female leader in the Roman Catholic Church who had flourished, in spite of the religious and cultural obstacles placed before her. Her research took her to Germany in 2015 and again in 2017, both times to walk in Hildegard’s footsteps. As if propelled by a force beyond her control, Shanon completed her Ph.D. at Union Institute & University in 2016, with her dissertation winning the Marvin B. Sussman Award for excellence.

While writing her Ph.D. dissertation, Shanon started consciously taking note of synchronicities unfolding around her. For example, the sudden availability of an empty Byzantine Church. And it being located only two blocks from the very church Shanon had been working for 20 years.

“We were not really sure what we were doing, but something bigger is driving it. We facilitate, but there is a greater power in charge.” – Shanon Sterringer

Shanon marshaled her resources, bringing together family and close friends to purchase the church property. Together, they would establish a non-profit organization inspired by Hildegard of Bingen. The property would quickly become known as The Hildegarden, a non-denominational spiritual community center, focused in the holistic charism of St. Hildegard.

Shanon intends for the Hildegarden to form into a sacred space. Along with the support of her family, she hopes to give-in to the spiritual presence surrounding the old church to guide the process. Since Hildegard appears throughout, Shannon is confident in her approach.

For example, while visiting the Museum am Straum in Bingen, Shanon found a poster with an image illustrating Hildegard’s monastery at Rupertsberg. The resemblance between Hildegard’s old monastery and Shanon’s Hildegarden is stark. Please see the first attached photo below (the photo has a picture of the poster of Rupertsberg 1151 and The Hildegarden 2016). 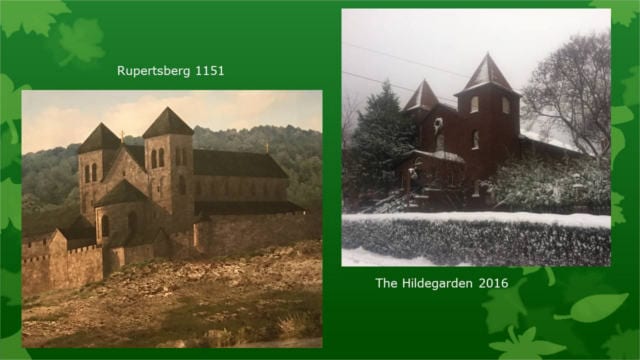 The Hildegarden is located in what was formally St. Michael’s Church in Cleveland. Interestingly, in Hildegard’s Vita she has a near-death experience leading to a vision of St. Michael. As a result of her vision, Hildegard woke up and expressed that it’s not her time, that she still has work to do.

“I see St. Michael’s role here as, once again, bringing Hildegard’s spirit back to continue doing the work that needs to be done. These are but a couple of the synchronicities that have affirmed for me that Hildegard has been actively involved on my journey and in the formation of The Hildegarden.” – Shanon Sterringer 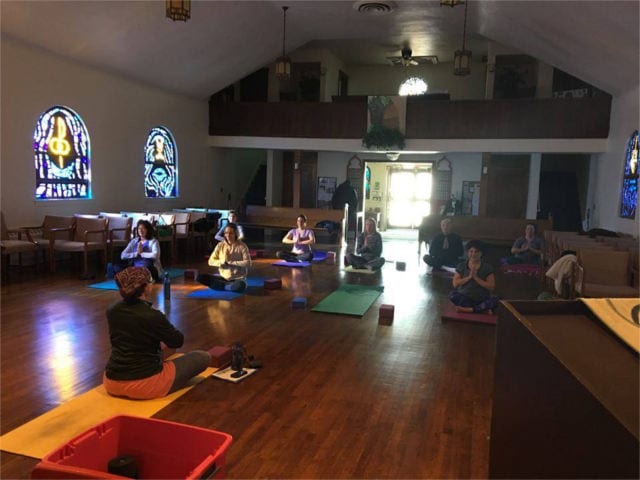 Yoga with the Saints at Hildegarden

The Hildegarden’s mission is to help people grow in mind, body, and spirit. Shanon hopes to bring Hildegard’s “care-ism” into the community; to make her available to the whole community. Even though most programs at the Hildegarden programs are not Hildegard-related, her presence is a guiding force. The Hildegarden offers a variety of community-based fellowship and functions, including: 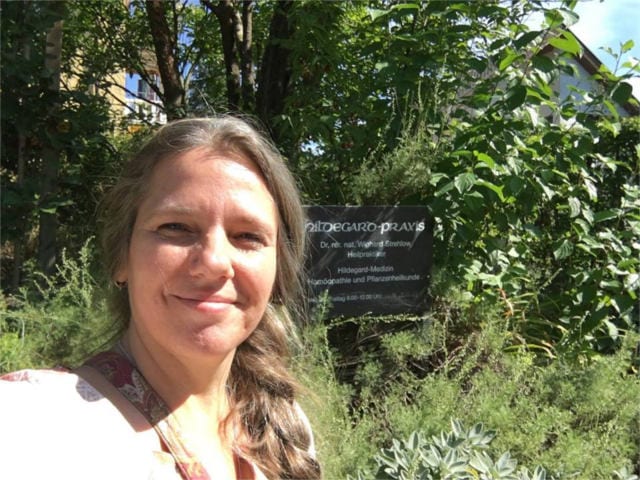 On a recent trip to Germany, Shanon met with Dr. Wighard Strehlow at the Hildegard Praxis.  They are tentatively planning a seminar at The Hildegarden in the near future.  (See photo of Shanon in front of his clinic in Germany.)

Inspired by Hildegard’s Many Facets

Shanon’s appreciation for Hildegard stems, in part, from her belief that Hildegard remained within the Church in order to promote change. As a result, Shanon, much like Matthew Fox, explored alternative routes to leadership in the Episcopalian Church, where she could be ordained. However, Shanon’s personal journey continues to call her back to the Church to work for change from within.

Shanon’s background and passion has always been with ministry. Without Hildegard, Shannon says, she would not have had the wherewithal to remain in the Church. Hildegard gave her a different lens through which she could appreciate the Church. Consequently, Shannon firmly believes that creative leadership will help secure women’s role in the Catholic Church.

Shanon has recently returned from an extended trip through India. During her trip she gave two seminars on Hildegard and the gifts she offers to ecclesial leadership today.