Ordo Virtutum tells the age-old story of the vulnerability of innocence and paradise lost. The story follows its main character, Anima (the Soul) as she faces – and ultimately succumbs to, the earthly temptations of evil. During her journey Anima comes to realize the support of the many Virtues who surround her, including Queen of all Virtues, Humility.

We were able to enjoy the unique and beautiful performance, a truly humbling display of talent and passion for the great work of Hildegard. After the performance in San Francisco – and our conversation with Deepak, we had the opportunity to meet with several of the members of the San Francisco Renaissance Voices, including the skilled Director, Katherine McKee, and Producer, J. Jeff Badger.

Diana Rowan graciously spent some additional time with us discussing what Hildegard’s music means to her and we are pleased to be able to share her thoughts with you.

Diana first discovered Hildegard in her early 20’s while she was a student of music (she holds a PhD in Music Theory.) Diana’s academic studies eventually exposed her to Hildegard’s music and as she dug deeper into the woman behind the scores she discovered the depth and breadth of Hildegard’s body of work. 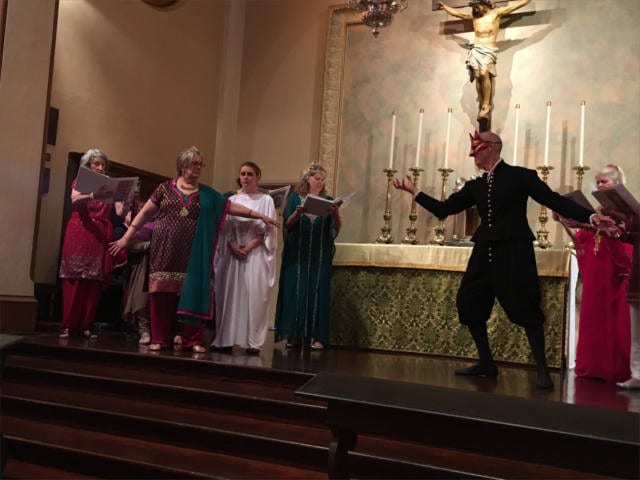 Diana has always been inspired by medieval music but she was drawn into Hildegard’s unique approach to spirituality and mysticism that spoke through Hildegard’s music. She was already inspired in many ways when she found Hildegard’s work as a naturalist and herbalist. For Diana, Hildegard began to embody an image of a powerful and complete person.

As Diana delved into women’s studies, she found Hildegard held a special place for her. Hildegard quickly became a role model for Diana, who, along with some friends, formed a quasi-guild. Their own kind of mantra would come to light in asking: what would Hildegard do? Like Hildegard, they hoped to bring a fiery energy to their passions.

Today, Diana continues to seek inspiration from Hildegard’s midlife awakening. In her early 40’s, Hildegard emerged from relative obscurity to embrace her creative power and go on to make her mark on the world that we have come to know and love. Inspired by Hildegard’s awakening, Diana embraced her own creative power to awaken her own sense of purpose.

Hildegard broke many molds in pursuit of her creativity. She reminds us that very little holds us back from our true calling. Hildegard’s Ordo demonstrates the beauty and power of breaking free while also honoring the natural boundaries, those sacred things that guide us. 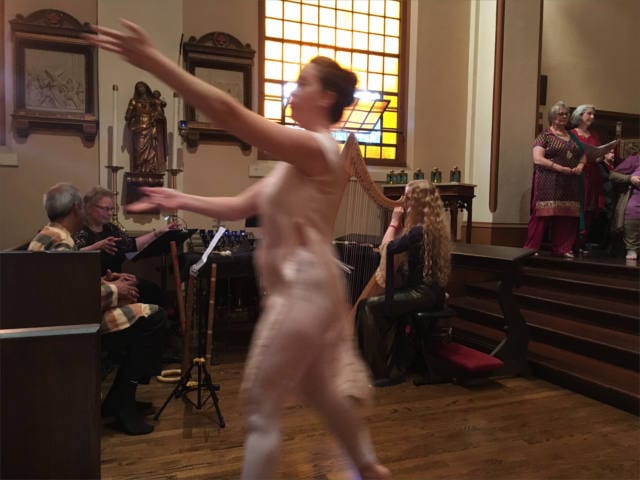 The musical performance of Ordo incorporates improvisation within the confines of a modal structure that the singers closely follow. This reflects the character of medieval music, where modes (scales) were use much more frequently than is common in modern music. Whereas most modern western music incorporates only two primary modes (major and minor or ionian and aeolian), the boundaries of medieval music allow for a broader palette of expression.

In music, modes provide the feeling, the emotion. Phrygian mode is also very common in Ordo. The result is an unsettled, mystical sound that evokes a kind of vagueness. This is a fitting vehicle for carrying the emotional situations throughout Ordo, as the soul is constantly moving through space, unsettled.

Ordo Virtutum was an experience full of layers. The first layer is for listeners to hear how beautifully the western and Hindustani classical music fit together, to see how the sounds of different cultures culminate in the same space.

There is a layer of femininity, as female characters represent all of the virtues in Ordo. Diana feels that this accentuates the feminine principle of acceptance, being in flow and being in a respected space. The notion that we don’t need to always seek out the immediate path, work in a linear fashion, but rather we can stay in a space for a long time without feeling we have to produce something. This is the Divine feminine quality, or our subtle moon energy, allowing things to grow in their own time.

In addition to an amazing piece, which truly brought Ordo Virtutum to life, my conversation with Diana emphasized an important theme of feminine consciousness, the idea of being willing to stay in a place for a long time. The modern impulse to seek out the tangible, to have a product, or that everything has to pay off financially, leaves little respect for letting the mystery unfold. Because of this people feel harried, they feel rushed and feel that everything they do has to be justified in financial terms. 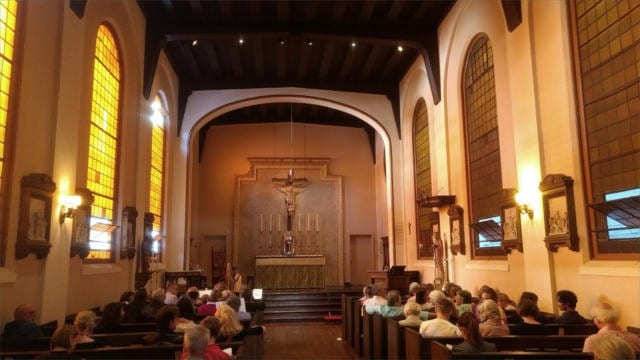 Diana suggested allowing the performance of Ordo to simply wash over. Though most of us would perceive this as a luxury, and not essential, perhaps Hildegard offers another ethos for being in a world where we treat ourselves a little more softly. We don’t have to justify creativity for anything more than our need to create. Hildegard reminds us of our creativity as a powerful resource for interconnectivity. And the power of creativity is as much a human right as it is a basic human urge.

Bright Knowledge Harp Circle is Diana’s program to support consistent inspiration and creativity. One of the main things she teaches is always returning to your purpose – and that purpose must be for yourself. At first this is a hard notion to tackle, but eventually artists feel liberated. Why does a tree grow? Because it enjoys growing. As humans it is our mission to enjoy our lives.

On this mission we battle monetary reward as the sole purpose of many of our pursuits. When a person is in touch with their true selves they tend to be a bad consumer, they tend to buy less. There are a lot of other forces at play that keep us in the same place. We need to heed our purpose but also seek out balance. Just as the masculine and feminine forces at play seek balance, a single-minded focus fails to reward. Like Hildegard, Diana seeks balance on her journey to create and find joy.