The ginger plant is native to Asia, where it has been used as a cooking spice for over 4,000 years. Ginger root is an integral plant within traditional Chinese medicine, going back at least 2,000 years. The majority of ginger root health benefits come from its anti-inflammatory and analgesic properties.

Among the more notable of ginger root health benefits is how it stimulates the formation of gastric juices, saliva and bile, and inhibits nausea. As such, incorporating ginger into a healthy diet may help improve intestinal function, appetite, and circulation. In Ayurveda, ginger is used to treat stomach upset, nausea, and diarrhea. Ginger root health benefits also include: a common cold remedy, a muscle ache remedy, and relief from the symptoms of rheumatism.

In Germany, 2018 is the year of ginger; the ginger root has been named as healing plant of the year.

The “Royal plant” of China

Ginger root health benefits have played an important role in Traditional Chinese medicine for centuries.  In fact, it is categorized within the class of “royal plants”, which are medicinal plants that can be taken in relatively large quantities for indeterminate periods of time, without negative side effects. These plants are credited with preventing sickness in healthy people and preserving vitality and strength.

Ginger Roots on a street market

The use of ginger in Europe grew as a result of expanding trade routes from Asia, which brought a number of healing plants formerly unknown in Europe but widely used in Asia. Initially, the Greeks and Romans used it primarily as a spice. As early as the 1st Century AD, the famous Greek doctor Dioscorides recommended ginger for stomach ailments.

By the Middle Ages, the prominence of ginger within traditional German medicine was already firmly established. Having grown through the network of monastic medicine, which was the primary provider of medieval medical treatments, ginger root health benefits became widely known relatively quickly. Paracelsus, who recommended it as a remedy for gastrointestinal issues, was a prominent figure in propagating the medicinal uses of ginger.

Ginger root is widely available in two forms: dried and fresh. You can enjoy ginger root health benefits by eating either form.

Ginger powder is made from dried and ground ginger. It is included in a variety of products, including ginger root supplement capsules and ginger spice for cooking. During processing the powder is often mixed with other additives. When you are buying capsules, ensure that the product is natural and free of chemical additives, sugar, dyes, and binders.

The aromatic quality of the ginger root has earned it a place among one of the more common cooking spices and flavoring agents. The food industry uses ginger as an additive or spice in many finished products and mixes such as paste, curry, jam, sauce, or chutney. Ginger root is also a popular flavoring included in baked goods and sweets such as cakes, gingerbread, candies, syrups, and lozenges. 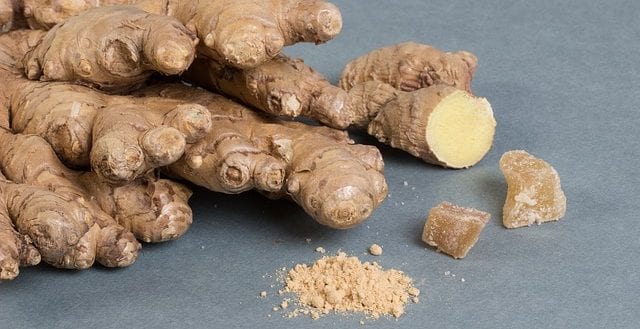 Candied ginger is a sweet delicacy in many Asian countries and has recently become popular in western markets. It can be a delicious way to enjoy ginger. But it is high in sugar, so you should only eat small amounts.

In western countries, drinks such as ginger ale (alcohol-free) or ginger beer have experienced a renewed popularity recently. Pickled and fermented ginger is another Asian specialty, which often accompanies sushi dishes.

Ginger root health benefits: how much should I take?

Ginger is safe when consuming less than 4g per day. Consuming more than 4g per day hasn’t been well studied. But side-effects are usually minor. Typically, the hot flavor of raw ginger prevents most people from consuming too much fresh ginger. Closely monitor how much you consume when using supplements.

As a rule, you will not need a strict measure to scale your dosage of ginger. As Hildegard might instruct, use your own discretio and listen to your body. 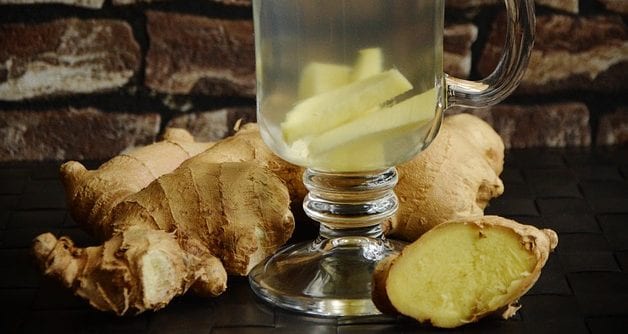 The recommended dose of ginger is two to four grams (one teaspoon) per day. For optimal ginger root health benefits, consume small amounts every day. This amount is also effective in treating mild forms of nausea or as a digestive aid. Some people experience side-effects, including: reflux (heartburn), or skin and respiratory sensitivity.

Limit ginger intake prior to surgery. Consult your physician if you are breastfeeding, taking any medication for a heart condition, diabetes, or a bleeding disorder. There are potential drug interactions or other effects that you should discuss with your doctor. The active components of ginger include volatile oils and pungent phenol compounds. Compounds such as gingerols and shogaols may impact blood pressure, blood sugar, and blood thinning.

However, Hildegard would have you consider a fennel powder mixture including galangal to promote the healing process after surgery.

Ginger root health benefits: looks like a root – but it is not!

Ginger belongs to the ginger family (botanical name: zingiber officinale). The fresh ginger that we buy and use looks like a root, but strictly speaking, it is not a root. The ginger we consume comes from parts of the underground shoots of the plant. Though these shoots are underground, they are not technically roots. The ginger plant has branched rhizomes, sometimes called “rootstocks.” But rhizomes are not actual roots.

Hildegard herself favored Galangal, wich is another rhizome. Take a look at our post on What is Galangal?. Galangal has many of the same healing properties as ginger.