I had the pleasure of attending the open house and opening gala for the Fox Institute for Creation Spirituality in Boulder, Colorado. We are delighted to have this amazing resource located in our very own backyard.

The Fox Institute is based on the teachings developed by Matthew Fox, a storied theologian often credited for having reintroduced Hildegard’s thinking to a modern western audience. 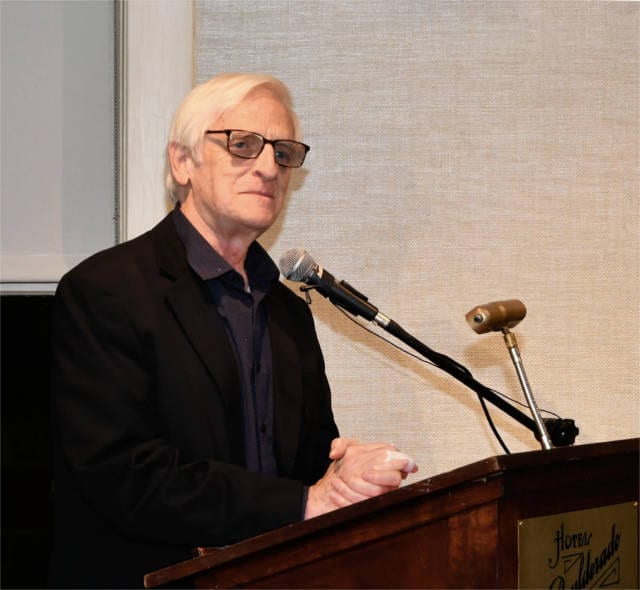 “The Fox Institute for Creation Spirituality (FICS) grows out of an ancient tradition and is also a contemporary movement. As a tradition, it is rooted in the wisdom teachings of the world’s great spiritual traditions. As a movement, it recovers and applies that wisdom to present-day circumstances and concerns.”

Creation Spirituality derives from the teachings of ancient theologians and mystics, including Hildegard of Bingen.

Matthew Fox has served as a pioneer of this open form of spiritual expression. He believes that the deep exploration of the rich philosophies of mystics can reorient our focus from the church to nature, and in doing so affirm creativity as our expression of divine. The divine in nature and creativity are ideas from Hildegard we value and explore here at Healthy Hildegard. 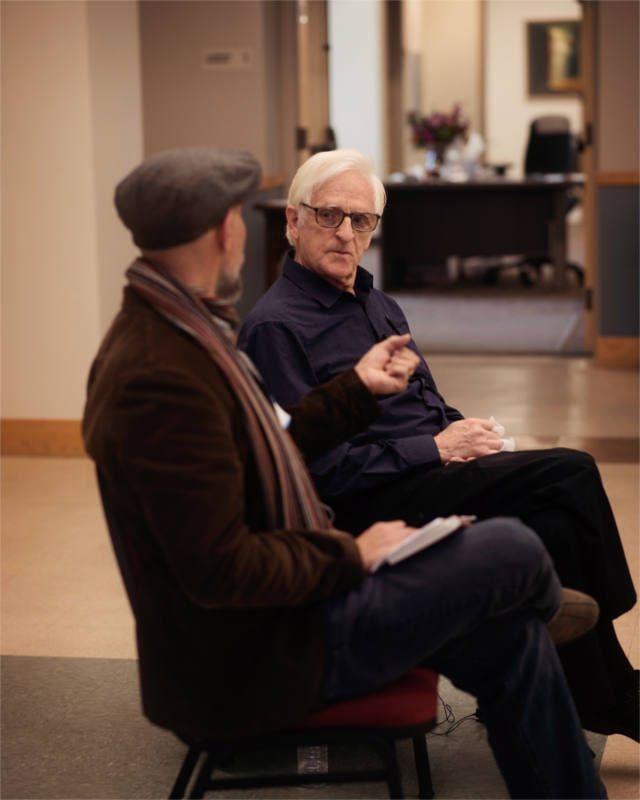 Matthew Fox is a prolific writer who has expressed his beliefs in the face of overwhelming risk and exposure. He has refused to condemn homosexuals and has promoted ideas centered on – among other things, feminine parity within the church and a resistance to the principle of original sin. For this Cardinal Ratzinger, who later became Pope Benedict XVI of the Roman Catholic Church, silenced him for a year. He was accused of heresy and subsequently expelled from the Dominican Order. He chronicled his experience in his book, “The Pope’s War: How Ratzinger’s Secret Crusade Imperiled the Church and What Can Be Saved.”

During the event, Jeannine Goode Allen, DMin a noted Hildegard scholar, and Ann Dean introduced one of several courses on Mystics, a required course of study at the Fox Institute.

In her description of the course Jeannine paraphrased Matthew Fox, “the mystic says yes to life, whereas the prophet says no.” She believes that our work is to allow the mystic into our lives, particularly those who have found us. Hildegard came to Jeannine 30 years ago by way of introduction from Matthew Fox.

Like many of us, Jeannine’s relationship with Hildegard’s contributions began with her music. As a professional dancer, musician and performer, Jeannine’s encounter with Hildegard sparked a new energy within herself. When performing Hildegard’s music she felt full of life and noticed the benefits to her body and soul. 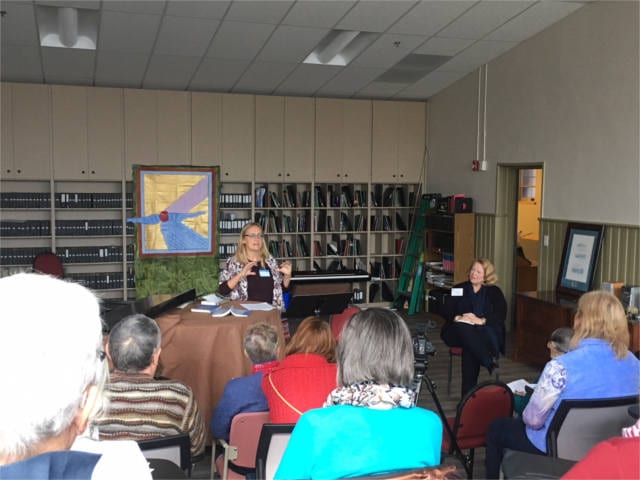 Jeannine Goode-Allen, DMin. and Ann Dean presenting on The Mystics

Jeannine found a relatable message through Hildegard of Bingen the mystic. In the same vein, Matthew suggests that those of us in the west begin by exploring the Christian Mystics, who share our own heritage, before delving into the many other traditions, notably those founded in eastern philosophies.

As resources of medieval mystics, Jeannine points to several of the Meditation Series (published by Bear & Co., including books on Mechthild of Magdeburg, Julian of Norwich, Meister Eckhart, and of course Hildegard of Bingen.

In her path of discovery, which she continues to pursue, Jeannine recommends finding your roots, or the place where you go deep. In Jeannine’s case, Hildegard appealed to her own roots in music, and so the connection became subconscious. As Meister Eckhart suggested, we must be moved by the inner parts of our soul, that place where our works live and where we find the true motivations that propel in order to truly grow.

Throughout Jeannine’s doctoral journey, Hildegard represented the power of persistence. Not just the power to persist within our lifetimes, but also the power to influence as in the case of Hildegard for over 900 years. Jeannine discovered her own obstacles and committed to addressing them directly. Challenges such as the fear of having her voice heard, or chronic illness, and panic attacks that prevented her from pursuing her greatest joys of song and dance.

Jeannine credits her discovery of Hildegard for having revealed her gifts in singing and painting, and even in finding good health through viriditas. The process propelled her through a successful heart surgery, which she credits in part to Hildegard’s parsley wine and Hildegard’s cookies of joy. She believes that in order to explore the beauty and sensual nature of life, we have to savor all of our senses, including the pain. 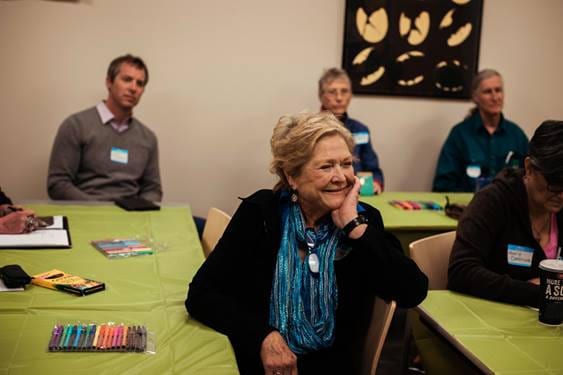 The teachings of the Fox Institute emphasize one of Hildegard’s primary tenants of renewing our connection with nature to find the joy and creativity of God. In connecting with her work, Jeannine healed, and now she works to connect with others to help them heal. She believes that as we connect with the mystic within ourselves, we become the prophet to share with others; the mystic is the healer along the path to the prophet.

I had the joy of meeting and spending some time with David Stang, an old friend of Matthew Fox. David’s sister, Dorothy Stang had been a student of Matthew Fox at his first Creation Spirituality Institute in Oakland, CA. She was later martyred in the Amazon forest of Brazil.

Matthew Fox had written about Dorothy as an eco-warrior who worked to protect our planet and its disparate cultures.

Dorothy’s younger brother, David, now in his 80s offered so much useful information about Creation Spirituality. He served as a Catholic priest for 10 years in Africa, before leaving the Church to marry, and adopt a broader view of spirituality. 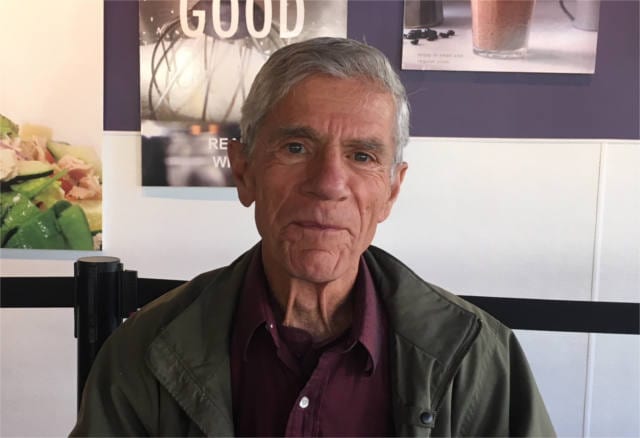 According to David, Creation Spirituality adopts the view of Original Blessing in place of Original Sin. Our work as humans is not to redeem ourselves of a persistent sin, but to enjoy the blessings of all creation as the basis for all things in the cosmos and the explosion of life resulting in our being.

As opposed to fundamentalist religious teachings, which support an anthropocentric ideal, with man at the center of all creation, creation spirituality casts man as an equal part of all creation. He believes that among humans the patriarchy of the Church fails us. Instead, we should view God and nature in the divine feminine form.

Matthew Fox on the Power of Creativity

Fox believes that our culture underestimates the power of art to heal the soul. We agree. Art and creativity are the basis of creation. Too often, within the teaching of art spirituality is overlooked.  He strongly believes that our connection with the divine is strengthened – even essential, via the entwinement of spirituality and creativity. The ecstasy and joy of learning first come through art and creativity, something he sees as observable truth to the power of creativity as a spiritual practice. He affirms that expressing ourselves creatively satisfies a starvation that our culture is currently experiencing. 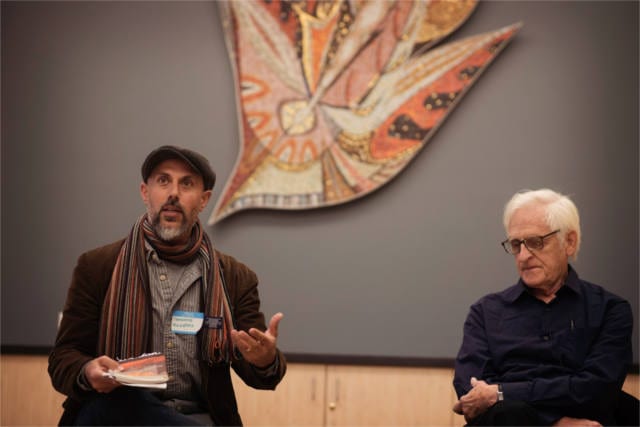 Fox believes that the point of art as meditation is to discover oneself, a way to “give birth” to your imagination and soul. This technique is often confused for the expression of our soul, but it should really be about a pathway to uniting ourselves from within. He believes we have distorted view of art in our culture; we tend to think in terms of artists and then the rest of us. But art, any form of expressive creativity, is intrinsic to all of us and should not be viewed as something that is possessed or not. Part of the purpose of the Fox institute is to turn out mystics and prophets, mystical warriors trained in the skills of walking their own creative paths. 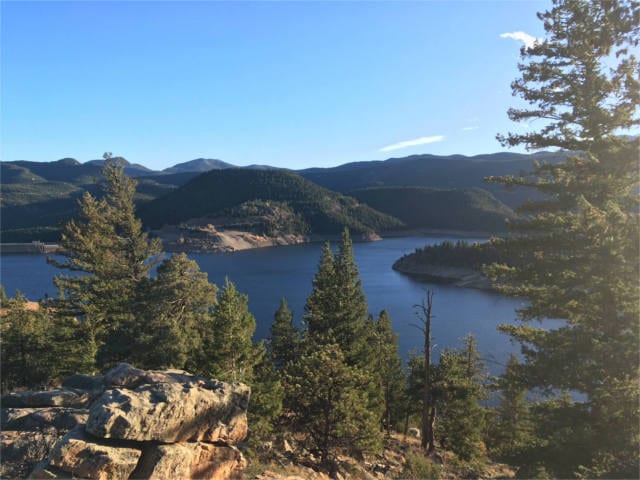 As a way of celebrating creativity and nature, I rode my bike to Boulder’s Gross Resevoir to take in the beauty before dinner. 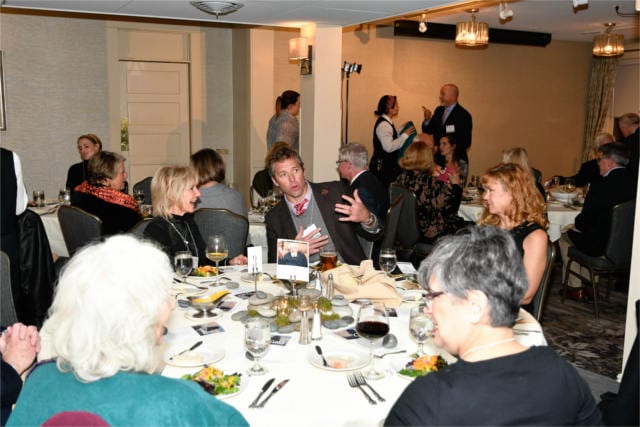 I joined David Stang at the evening’s gala where I encountered many people active in preserving Hildegard’s legacy. Michael Conti, the director of The Unruly Mystic and pioneer of Hildegard as the patron saint of creativity, joined my table with his fiancé, Heather Boyle. Matthew Fox gave a great speech along with several other impressive theologians, many who I had not encountered previously.

One of the dinner conversation topics that struck me was Dr. Marvin Anderson’s comment on magnanimity in describing the Fox Institute’s president, Dr. Susan Evans. He spoke of magnanimous people as those who reveal their virtues to others fearlessly; that courage is what strengthens us.

After enjoying David Sharp’s band in a closing celebration, I walked away from the Fox Institute with a greater respect for Matthew Fox’s selfless contributions and with a sense of amazement at the magnanimous efforts of those creating this great place. People like, Dr. Susan Evans, Dr. Carol Bennington, Kip Hubbard, and others who are making a valuable contribution to Boulder – and our spiritual landscape at large.