Cowslip Primrose for Colds and Depression

Cowslip primrose (Primula veris) is a variable evergreen or semi-evergreen perennial native to Europe and west Asia. The cowslip primrose grows on open meadows, coastal dunes, and cliff-tops. The deep yellow flowers are produced in spring (veris in Latin means “spring”) blooming in clusters of 10-30 blooms. Rarely, the blooms can also be red and orange as a result of the propensity to cross-pollinate with colored primula hybrids.

Hildegard’s Use of Cowslip Primrose

In German it is called Schlüsselblume, which directly translated means “Key Flower”. Hildegard referred to it as “Heaven’s Key”. She believed that this plant with the bright yellow blossoms received its power from the sun, and could suppress melancholy in man, i.e. “When the cowslip primrose is heated and placed on the chest, the forces of the sun radiate back and cheer the heart.”

Cowslip primrose has its roots in Scandinavia, so it was not a part of ancient medicine on continental Europe. In her book Physica, Hildegard of Bingen’s reference to cowslip primrose focuses primarily on its topical applications to treat melancholy.

In Hildegard’s later writings of monastic medicine, cowslip primrose was often referenced as a cardiac tonic, for colds and wound treatment. The tincture produced from the flower extracts can also serve as nourishing skin treatments. 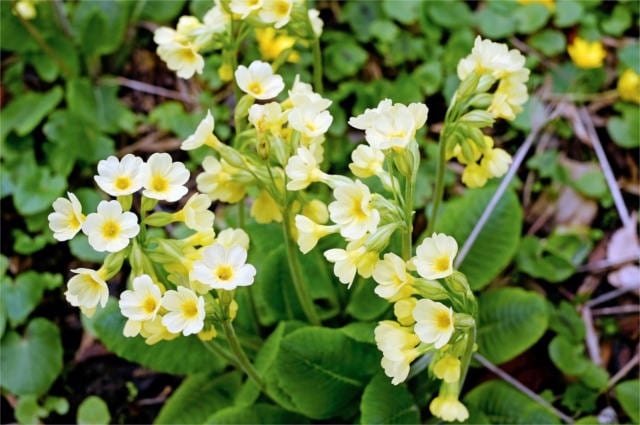 The flowers have a honey-sweet taste and even take on the appearance of candy. In fact, some German traditions coat the flowers with sugar and serve them as a sweet treat. Young leaves of the plant are suitable for salads or cooked like spinach. Primrose adds a light, pleasant flavor when mixed with other vegetables.

Most practical medicinal benefits are found in the root of the cowslip primrose. The flowers, though beneficial, have a slightly milder effect. The main active components of cowslip primrose are the plant flavonoids, essential oils, tannins and silica. The saponins can irritate the gastric mucosa, which stimulates the nervous system. The result is an increase in bronchial secretion, which helps to relieve some symptoms of the common cold.

Modern use as expectorant

Today, cowslip primrose roots have scientific recognition for use in resolving respiratory inflammation. Cowslip primrose has a relaxing effect on bronchial airways and mucous, so it is a suitable remedy to relieve coughing during cold season. It is particularly useful to relieve age-related coughing; a nagging cough resulting from a weaker heart, causing fluid to build-up in the lungs. In these cases, cowslip tea can serve as an expectorant, helping to cough up the mucous and thereby relieves the circulation.

In folk medicine, the Primrose root is also used to address the symptoms of gout, rheumatism, whooping cough, asthma, and nervous discomfort (tremors and stomach cramps) (then the spots are rubbed with a tincture). Primrose is also recommended for people with cardiac weakness, migraine, dizziness, insomnia, and anxiety.

Cowslip root can be used in powdered form – or crushed, for use in tea. The average daily dose should not exceed one (1) gram. The dosage, however, may be increased to 2-4 grams in the short term if symptoms are acute.

In order to support the intended effects, particularly in the case of a cold, the tea can also be enriched with other medicinal plants such as fennel or anise.

Preparation of cowslip primrose tea using only the flowers is particularly suitable for children, and given the mild effects, it is generally well tolerated. To do this, combine 2 teaspoons of Primrose flowers with 0.25 liters of boiling water, and allow 5 minutes to steep before straining. The tea can be sweetened with honey. Drink a cup several times a day.

For sensitive persons, cowslip primrose may cause allergic reactions resulting from skin contact (you may observe skin redness etc.). In case of overdose, nausea, vomiting or diarrhea may occur.