We recently had the opportunity to speak with internationally acclaimed musician, Deepak Ram about his performance of a contemporary Ordo Virtutum in San Francisco. This contemporary take on Ordo Virtutum, performed alongside Diana Rowan and the San Francisco Renaissance Voices, takes an interesting twist as it incorporates the sounds of traditional North Indian (Hindustani) classical music for which Deepak is famous. 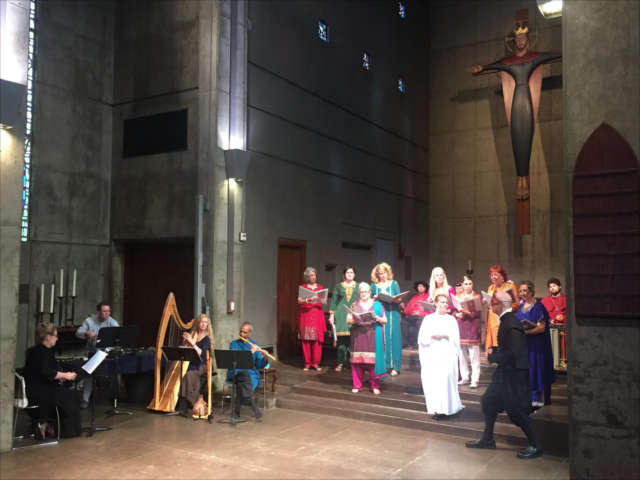 Deepak plays the Bansuri Flute, an ancient Indian bamboo instrument. He is an accomplished composer, soloist, and versatile collaborator. His performances range from western classical ensembles to his roots in classical Indian music.

The Spiritual Side of Indian Music

Even though Deepak’s musical influence comes from his Indian classical background, his approach to Hildegard’s music is consistent with our interpretation of her work. Deepak explains that much like Hildegard’s belief that music represents a divine state, in India music derives from spirituality. Along the same path as yoga, music combines spiritual, mental, and physical disciplines resulting in convergence of spirit, mind and body.

The Power of Improvisation

Indian music operates as an individual art form, without the benefit of orchestras and back-up bands.  Improvisation plays an important role in the development and performance of music. Those who perform are thus free to tell the story of their spirit. Music shows the path to self-realization, each person’s unique path to truth found in the infinite reflections that music presents.

The concept of performing Hildegard’s Ordo Virtutum first came to Deepak in 2008, from a harp player, and Deepak’s collaborator, Dr. Diana Rowan. They went on to perform five shows with great success.

The Indian twist on this contemporary Ordo Virtutum comes from the similarities between the modes found in the Indian raga system, and those common in ecclesiastical music. Specifically, a system of eight modal categories is generally associated with the repertory of Gregorian chant, the basis of Hildegard of Bingen music. These modes correspond with the 10 modes found in Indian Classical Music (72 modes, reduced to 10 for practical purposes).

When Deepak and Diana practice, they take one mode, and develop it for months, until each note reveals itself to them. This deep immersion in a single mode yields profound meaning for the musicians. Deepak often tells his students to treat each mode as if it were God.

The Essence of Hildegard’s Music

Perhaps because she was never formally trained, Hildegard’s music  seems to derive from nature. She described her inspiration as the sounds heard with her “inner ear”. This aesthetic sense for developing the essence of music comports with Deepak’s training as well.

When Deepak hears Hildegard’s sounds, he feels her sense of searching for divine light, a sense of one who recognized a degree of self-realization. In this respect, Hildegard’s music represents an ideal form. She injects so much of her spirit into each composition that the listener experiences her essence.

Without knowing it, Deepak’s instincts about Hildegard seem consistent with Hildegard’s own words to describe the experience. While composing, Hildegard created what she called “celestial harmony.” She drew from what she described as “the trumpet sound of the living light.”

Both Diana and Deepak suggest the essence of Hildegard of Bingen music emerges for those who allow the sounds to wash over without judgement. Like the classical music of North India, Hildegard’s music gives the listener an authentic glimpse into the essence of its composer.

Deepak harkens us back to Indian philosophy, wherein it is believe that sound was the first manifestation of being. Music is the extension of our primordial vibration. And, though Hildegard may not have been formally trained in music she was a self-realized individual whose music was an extension of her being.

The Limitless Potential of Being

Deepak describes the nature of kundalini as one whose seven chakras are awakened. On this site, Teri Degler similarly described Hildegard’s kundalini awakening process. Like Hildegard, Deepak believes that all human beings have potential for searching and music is another path to discovery.

The following piece offers an audio glimpse into Deepak’s music and ragas.  We hope to have more on his collaboration with Diana Rowan, and their contemporary take on Ordo Virtutum.