24 Bitter Spices for the Kitchen 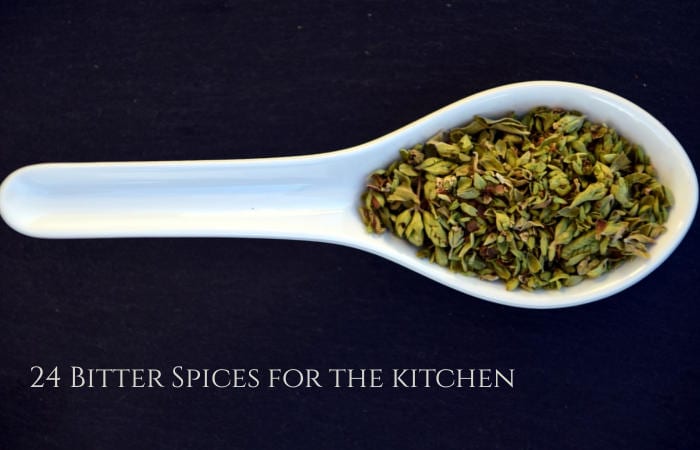 Remedies and elixirs based on bitter spices and herbs can be traced back to the middle ages. Healthy bitters have played an important role in monastic medicine as a means of preserving good health over a long life. The ancient Swiss physician, Paracelsus (1493-1541) developed a bitter formula, which he called “Ad Longam Vitam” (the life-extending elixir) containing several bitter spices and herbs, including gentian root and angelica.

“What is bitter to the mouth is healthy to the stomach.”  – Old German Adage

The original German sounds a little better, of course, because it rhymes, “was bitter dem Mund, ist dem Magen gesund.” But the translation makes the point clear enough.

Many spices and herbs contain naturally bitter substances that can be found in many naturopathic remedies. As a general rule, most spices and herbs traditionally used for seasoning fatty meat dishes are rich in bitter substances. Of course, fatty foods and heavy dishes may not be the best fit for those trying to lose weight, but fortunately, many of the same spices that traditionally accompany rich meals may also enhance lighter dishes. Salad dressings are a great place to experiment with bitter spices and herbs to enrich aromas and expand the palate.

When you begin introducing bitter foods into your diet, start by using small amounts. Many bitter foods deliver powerful flavors in small doses, which is why bitter spices are a great way to liven-up your meals with bitter flavors. Luckily, just as we have become accustomed to sweet, sour, salty, spicy and umami flavor profiles, we can also get used to bitterness.

For many of us, we first perceive bitter flavors as unpleasant and so a lot of the bitter foods will fall into the “acquired taste” category. With a sense of adventure, however, we can learn to appreciate a bitter flavor profile over time. Our appreciation often grows once we have experienced the sense of well-being that accompanies the benefits of bitters for health.

Hildegard of Bingen reminds us that our health is largely a function of our own decisions. In the spirit of Hildegard’s nutrition and taking responsibility for our own health, we can rebuild our natural tolerance for bitter flavors by integrating bitters back into our diet. We’ve listed some of our favorite bitter spices and herbs you can incorporate into your diet.

The fine sweet taste of chervil gives soups, sauces, and salads a favorable aroma that we often associate with springtime. Served fresh, this kitchen herb is full of vitamins, stimulates circulation, and has a detoxifying effect.

Ginger and galangal are classic Hildegard herbs that simultaneously serve as kitchen spices and effective home naturopathic remedies. Both ginger and galangal provide a pleasant, fine sharpness that is refreshing and spicy. It can be used fresh, dried, and ground in a variety of dishes.

Caraway is best known in Hildegard medicine as a remedy for diarrhea and for its contribution to Caraway Tea. As a natural organic bitter spice, it helps to invigorate digestion for foods that may be difficult to digest, and to prevent general stomach discomfort.

Cinnamon is a source of healthy bitters that has a warm and intense fragrance with sweet and slightly woody and earthy flavors. For food and pastries it adds a discreetly spicy and sweet flavor aroma. Additionally, cinnamon harmonizes with the flavors of cloves, nutmeg, vanilla, cardamom, ginger, and coriander. Cinnamon also combines well with chili and cayenne pepper, to enhance their spicy flavors.

When cooking, always add cinnamon at the end, otherwise the taste becomes too bitter.

The barberry also known as Berberis, is a sour autumnal fruit that contains many valuable healthy bitter substances. In Asia, barberries are used as a spice to accompany rice dishes so that the blandness of rice can be accompanied by health benefits.

The use of fenugreek use originated in the Persian Empire, a naturopathic herbal medicine, beauty elixir, and spice. The seeds have a spicy-bitter flavor reminiscent of lovage. The full aroma reveals itself when lightly roasted, which also softens the natural bitters present.

Mustard serves as an important condiment in every German kitchen. Beyond its flavor, mustard serves as a remedy in naturopathic medicine. Mustard’s bitter properties contribute to two unique functions: (i) its healthy organic bitters stimulate digestion; and (ii) helps stimulate blood circulation.

Asafetida is a resin that is extracted from the roots of the Asafetida plant (Ferula Assa-foetida). The name refers to a fetid smell, which serves to describe the penetrating, utterly unpleasant smell of the bitter resin. The smell dissipates after briefly frying in hot fat or oil, revealing a rather appetizing spice. Asafetida is commonly used in south and west India and Middle Eastern cuisine. It contributes to the flavor of soups, sauces, and vegetable dishes of all kinds. It is also commonly used in pickling foods, relishes, and chutneys.

Thyme is a common Mediterranean spice. It can be used fresh or dried. In its dried form, thyme preserves a spicy taste that unfolds when lightly cooked in meals. Thyme can be added to dishes during cooking to enhance its healthy bitter benefits.

Marjoram possesses naturopathic essential oils that contribute to its flavor and a distinctive aroma. Marjoram is a strong spice that was used by Hildegard of Bingen and should be used sparingly in contrast to many other herbs. It can be used fresh, as well as dried or even frozen.

The pungent taste and slightly bitter notes of lovage hint at celery. The lovage leaves also resemble those of the perennial celery. Compared to celery, however, lovage has an even spicier flavor enhanced by a unique bittersweet flavor that can act as a natural digestive aid.

Rosemary is highly aromatic with a slightly bitter and earthy flavor. The taste is comparable to a mixture of camphor and eucalyptus. Both fresh rosemary leaves and dried herbs are suitable for food preparation. It goes well with meat dishes, fish dishes, salads, soups, potato, and mushroom dishes.

Tarragon is a spice with a particularly unique aroma. Its slightly spicy to sweet flavor is especially popular in French and Italian cuisine. Tarragon is a great spice for fish, poultry, sauces, and salads. For seasoning both the leaves and the flowering branch tips are used.

Laurel (Bay leaves) is a dominant spice with a spicy, slightly bitter taste. Dried laurel leaves are part of the Bouquet garni. Despite (or, perhaps because of) its unique flavor, laurel adapts well and complements all sour and strong, hearty foods.

Sage has an intense, slightly natural bitter taste with dominant tones of camphor. Note that the older the harvested leaves are, the more bitter the flavor. If you grow sage in the garden, be patient, as the spice won’t develop its full aroma until the second year.

This spice from the ginger family helps reduce symptoms related to the common cold. Chewing on cardamom seeds helps fight bad breath, particularly the odors of garlic and alcohol. Additionally, some connoisseurs swear that cardamom brightens the mood.

Wild garlic is the perfect alternative for all connoisseurs who like the taste of garlic, but not the effect it may have on their breath. Wild garlic should not be dried, but rather eaten fresh, frozen, or pickled. Wild garlic can be added directly to a meal whole, chopped, or while still frozen. It can also be made into wild garlic oil or pesto.

Watercress is often used in salads or as a spice for soups or sauces. It is rich in vitamins and minerals, and bitters for health, being why it is also widely used in natural medicines for coughs and colds. The watercress is best served fresh, when its bitter and slightly spicy flavor is at its peak.

Bertram is a Hildegard favorite. It looks a bit like chamomile and has a uniquely spicy taste. Bertram can also be used as a spice, by grating the fresh root or fresh herb over a meal. Using Bertram as a spice enhances the flavor of food while also promoting digestion and utilization of nutrients.

Savory tastes very spicy with noticeable hints of pepper. The taste varies depending on when the savory is harvested; it is generally more intense in winter than in summer. Savory has long been a staple spice for dishes including beans, but is a versatile and strong spice that can liven up many different foods.

Oregano is commonly known as the “pizza spice”. The herb-aromatic fragrant herb is an indispensable part of the modern kitchen, although this plant has only been used for about 200 years for seasoning. As a remedy, however, oregano was widely used by the ancient Greeks.

Mugwort is one of Hildegard’s healing plants that is often forgotten. Due to the very bitter taste and bitter aromatic fragrance, it is not as popular as the comparatively mild and versatile herbs such as dill, basil, or oregano. When adding mugwort to your dishes, use sparingly. Even small amounts of this spice are sufficient to flavor your food vigorously and give it a spicy and slightly bitter taste, while still providing the healthy benefits of bitters.

Coriander is a spice that lends itself to experiments in the kitchen, because its relatively mild flavor makes it hard to dramatically alter the flavor of a meal. Like many of Hildegard’s favorite remedies, coriander has a positive effect on our intestinal health, and simultaneously provides a very pleasant flavor.

Turmeric is mildly aromatic and has scents of orange or ginger. It has a pungent, bitter flavor.  Turmeric is the spice that gives curry its yellow color. It has been used in India for thousands of years as a spice and anti-inflammatory medicinal herb.

Hildegard of Bingen’s Bitters for Health

Hildegard of Bingen is widely known for her prestige as a saint, writer, composer, and mystic, but one of the best things that she has left behind for us has been her extensive knowledge of naturopathic remedies and bitters for health. Of all of the above spices, bitters are present, allowing for those who ingest proper amounts of these herbs to promote healthy metabolism and digestive health.